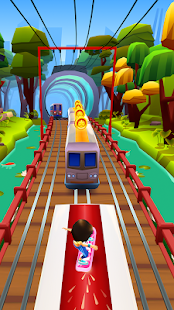 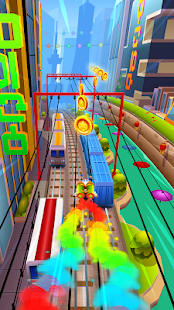 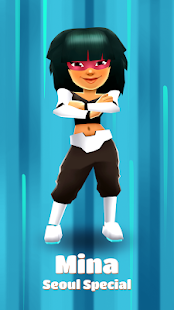 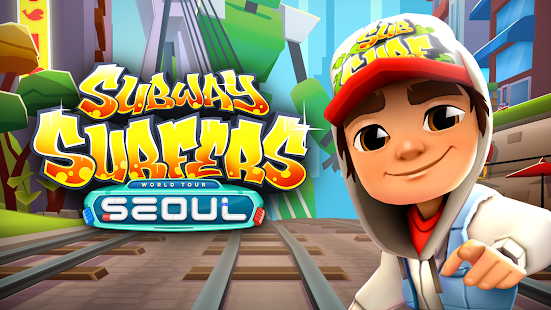 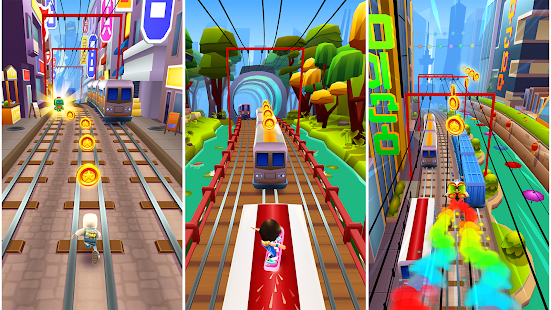 Subway Surfers is one of the most popular games in the world, which has stuck a huge number of people to the screens of their smartphones and tablets. It is available for Android devices for free and has already gained millions of downloads. The game literally personifies the modern generation with its love for skateboard and street culture and conveys the whole crazy rhythm of their lives.

The protagonist of Subway Surfers - boy Jake - develops incredible speed and shows wonders of dexterity. Of course, all this is due to the skill full management of the player. Jake has fun painting color full graffiti on train cars. For this he is pursued by an evil policeman with his dog. The goal of the game is to break away from the pursuers and collect as many coins as possible. You need to be very careful, because Jake will have to literally tack between the cars, jump on moving trains, show the wonders of the reaction, moving from one line to another while avoiding obstacles.

In addition to the coins on the way the hero will meet and various bonuses that will facilitate the escape. For example, the jetpack will carry Jake over all obstacles and will provide an opportunity to collect a lot of coins, a skateboard will save from an error, a magnet will attract all the coins to himself, and super-sneakers will allow even the train to jump. Also in the game there is a mega-bonus: mysterious boxes in which various gifts are hidden: from coins to new things for unlocking characters. When collecting a certain number of collectibles, new heroes are opened, which can be chosen instead of Jake. There are unique characters that appear after each update of the game and become available after completing a special task. Some heroes can be opened for coins.

The game store also offers a wide selection of costumes for characters, upgrades for bonuses and new designs and super abilities of skateboards.

Developers offer players a variety of tasks that can be performed during the game. If you have an Internet connection, the game offers the Daily Challenge - a daily task for which you need to collect the letters of the word scattered on the railway. For the collection of each word the player is waiting for a reward in the form of coins or prize boxes. In the game updates, the hero moves to a new place and the player opens another Weekly Hunt - a collection of thematic figurines that personify the city. Prizes for completing this weekly assignment may vary widely.

An important bonus in Subway Surfers are the keys that come across in mysterious boxes and are given for awards in the form of cans of paint. Such cartridges are given for various game achievements, for example, a certain number of times to ride on the middle line. The key allows you to continue the game when you make a mistake, when the policeman already holds the hero in his hands. But the key gives him another chance.

An important in this game is the graphics and music. The graphics are colorful, well-designed, in a word - quite high quality. Music perfectly reflects the main idea of the game and is pleasant to the ear, but it does not distract from the action itself.

When accessing the Internet, players are given the opportunity to compete with their friends or other players in scored points. In general, Subway Surfers is a new word in modern games on Android, and that is why it is of great interest for different ages - from schoolchildren who are interested in setting a new record among their friends, to adults, who also sometimes want to relax. Download Subway Surfers for free on your Android and dive into the wonderful world of street culture in different cities of the world!

Description:With the idealo shopping app, compare the cheapest prices for your top products around the clock and shop at the best price. In total, you can compare more than 350 million offers from over 50,000 ...

Description:We have made Netto for you, so you can save both time and money when you shop in your Netto store. Netto gives you strong offers and a lot of other benefits, so you can get even more out of Net...

Description:Take the best capture of your photo and even record your video in high resolution.???? All complete features like dslr photography packaged in small compact size and clean interface,✔4K...

Description:It's simple - choose your favorite colors, mix them, and then dip the item into the water. The result will not be long in coming - fashionable and bright prints on a variety of things: * ...

Description:We have prepared routes and took as a basis those sights that everyone should see. Of course, there are many more interesting places. St. Petersburg is an open-air museum, and there are interesting...

Description:--- CAN YOU SAVE THE FGTEEV FAMILY AND SURVIVE THE HOUSE OF DR. JAX? ---Explore a house full of weird technology and slimy surprises as you attempt to save the FGTeeV family. Take control o...

Description:The most addictive game!Enter the arena and face the other holes in a fierce battle. Eat everything in sight with your black hole and expand it to eat more! Show them who is the biggest...

Description:Open your very own chocolate shop! Hand-craft the chocolates yourself: Melt the cocoa tablets, pour into the molds, place the toppings and much more! Can you make the world's most d...

Description:Run away from your opponents or they will knock you over! Start playing the most fun and exciting last man standing game where falling is not an option. Knock over your opponents and become the las...